From Libregamewiki
Jump to navigation Jump to search

0 A.D. is a historical 3D real-time strategy game developed by Wildfire Games. It takes place between 500 B.C to 500 A.D. and focuses on economy and war management. 0 A.D. offers a variety of playable civilisations whose characteristics are based on real world history. 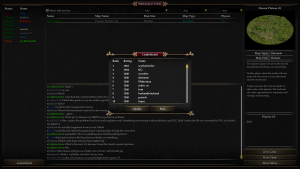 In 0 A.D., players start with building a base in order to develop their economy, research technologies and train an army. The game has a strong focus on the combat aspects of real-time strategy games. Therefore different units have to be built to create an effective army. Which in turn requires the harvesting of resources.

0 A.D. has a competitive multi-player mode.

The different civilizations (Athenians, Britons, Carthaginians, Gauls, Iberians, Kushites, Macedonians, Mauryans, Persians, Ptolemies, Romans, Seleucids, Spartans) have distinct strength and weaknesses, which are based on real world history. For example: Being allied with Rome came with great benefits (as well as great peril). As an in game effect, allied citizen-soldiers gain a +10% attack when in Roman territory. [1]