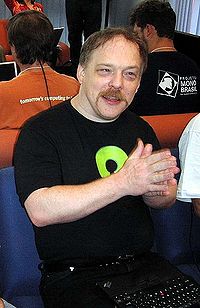 Eric S. Raymond, or simply ESR, is the co-founder of the Open Source Initiative. He also works on the Battle for Wesnoth project as a programmer and campaign developer.

He wrote the WML (Wesnoth Markup Language) maintenance tools for maintaining campaigns. He co-authored the Northern Rebirth and wrote The Hammer of Thursagan and maintains the history and geography of Wesnoth.

He also took on the job of bug triaging and stomping. In addition, he overhauled the game UI.[1]

According to Ohloh.net, Raymond contributed to the Wesnoth project in a variety of languages with the total of 2638 commits and 61193 changed lines.[2]

This page is a stub. Please help Libregamewiki by expanding it.