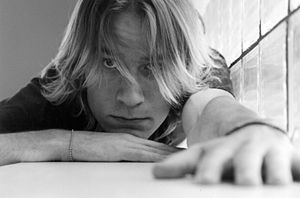 Jason Rohrer is a developer of a number of free games, as well as other free software. He currently resides in Potsdam, New York, USA. He is best known for his work on Passage and most recently One Hour One Life. Outside video games, he is probably most well known for the project, Mute, an anonymous filesharing software.[1]

He lives with his spouse and his two sons. With his family, he lives a simple and inexpensive lifestyle that allows his family to live under the budget of $10,000 year.[3]

Jason Rohrer madeNOT OBVIOUS FROM THE LINK his living by relying on recurring donations from users of his software. Thus allowing him in some capacity to continue to write software, such as games.[4] He is also supported by one generous patron, Jeff Roberts along with sales of his software on the iphone market.[5]

He has been sued by the village for not following a law concerning the mowing of lawns, but he was later determined as not guilty. His court case made the local news.[6]

His life and his work is profiled by Esquire magazine.

Almost all of his games are released in the public domain, with the exception of Transcend, which was licensed under the GPL.

He also wrote about game design for The Escapist game magazine, and created game prototypes for his articles there, but despite their license they are not reall y free, because the "source code" is binary, and require a proprietary Windows-only tool to compile and run.[9]